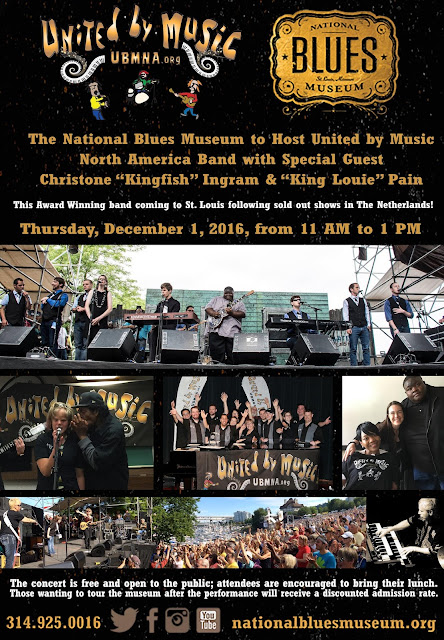 We're headed for St. Louis! Three performances this week! Two during the annual convention for TASH and one in the LUMIERETHEATER at the National Blues Museum! The TASH Conference shows are for those registered at the conference, but the one on December 1st is FREE and OPEN to the Public PLUS, for those who attend the Noon Concert, a DISCOUNTED admittance to the museum is offered. 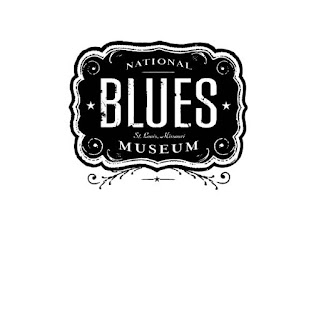 St. Louis, MO – November 18, 2016: The National Blues Museum announced today that it will host a free, lunchtime concert on Thursday, December 1, 2016, from 11 am to 1 pm featuring the United by Music North America Band with special guest, Christone “Kingfish” Ingram. The concert will take place in the museum’s Lumiere Place Legends Room.
United by Music North America is a performance-based program for people who are very musically- talented and have developmental challenges, such as autism. “We appreciate the opportunity to bring our talented and courageous artists for this special show to the National Blues Museum,” says Barbara Hammerman, one of the co-founders of United by Music North America. “The United by Music band is especially excited to have Kingfish as a guest musician, “Hammerman explains. “This child prodigy’s soul is possessed with the feeling, passion and fire of the much older men who created the Blues.”
“We know the audience will be both highly-entertained and moved by the performance,” says National Blues Museum’s Executive Director, Dion Brown. “The museum is honored to host the show and hope people will come out and see these inspiring artists.”
United by Music North America recently received the Muddy Award - Best Northwest Event for their series of performances and workshops during the 2016 Waterfront Blues Festival. The band has also performed at sold-out shows with their European counterparts in the Netherlands. Kingfish has
entertained at the White House and on national television shows including The Steve Harvey Show and
The Rachel Ray Show.
The concert is free and open to the public; attendees are encouraged to bring their lunch. Those wanting to tour the museum after the performance will receive a discounted admission rate.

About the National Blues Museum

The National Blues Museum is dedicated to preserving and honoring the history and legacy of Blues music and its impact on world culture. Located in Downtown St. Louis in the Mercantile Exchange (MX) district, the museum is an independent, 501(c)(3) non-profit organization whose mission is to be the premier entertainment and educational resource focused on the Blues as the foundation of American music. Voted as a top travel destination in 2016 by The New York Times, Smithsonian.com, and CNN, the National Blues Museum uses artifact-driven exhibits, live performances and interactive galleries to perpetuate Blues culture for future generations of artists, fans and historians. Conveniently located at the center of St. Louis’s convention and tourism district, the museum is within walking distance of the iconic Gateway Arch, the home venues of the MLB’s St. Louis Cardinals and the NHL’s St. Louis Blues, and many other attractions and amenities. For more information, visit www.nationalbluesmuseum.org. To stay connected, follow @NatBluesMuseum on Twitter, @NationalBluesMuseum on Instagram, and like "National Blues Museum" on Facebook.